Laryngectomy is the surgical removal of part or all of the larynx (voice box), usually due to laryngeal cancer. This surgery affects breathing, speech, and sometimes swallowing as well.

The larynx connects the trachea (windpipe) to the throat, allowing a person to breathe through the nose and mouth. It also contains the vocal folds (vocal cords), two small muscles that vibrate to produce voice. When the larynx is removed, surgeons attach the end of the trachea to a stoma (hole) created in the neck. The person with a laryngectomy (the laryngectomee) breathes through this hole instead of the mouth and nose, which are now separated from the lungs. The laryngectomee is also unable to speak in a normal way, since the vocal folds – the sound source for normal speech – are gone.

Swallowing problems (dysphagia) may occur after laryngectomy, especially in the early stages of recovery. This is because structures in the throat that played a role in swallowing prior to surgery have been removed. In addition, muscles in the neck, throat and esophagus that aid swallowing may be affected by surgical reconstruction or radiation therapy, and may not move the way they used to. Swallowing is still possible, but it works differently, and the laryngectomee may need to adjust to this.

Assessing and Treating Speech and Swallowing Problems after Laryngectomy 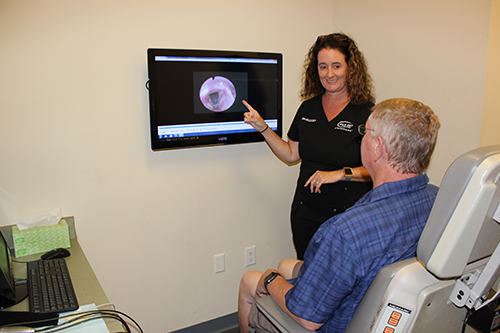 The Speech-Language Pathologist (SLP) will often meet with the patient before the surgery to evaluate his speech and voice and to teach him about anatomy and the effects of laryngectomy on speech and swallowing. She may also begin to discuss ways of communicating after the larynx is removed.
After surgery, the SLP will focus on teaching the laryngectomee how to communicate. He may use gestures, mouthing or writing initially. Ideally, he will eventually learn a method of alaryngeal speech (i.e., speaking without a larynx). One method is an electrolarynx, also called an artificial larynx. This is a small battery-powered device that is held against the neck or placed in the mouth, and produces an external sound source for speaking. Another method is esophageal speech, in which the person traps air in the throat and uses it to vibrate the muscles at the top of the esophagus for the sound source. A very popular option is tracheoesophageal (TE) speech, which also uses the esophagus as the sound source. This requires a surgical procedure called tracheoesophageal puncture (TEP) that can be performed either at the same time as the laryngectomy or later. A hole is created between the esophagus and trachea, and a small valve is placed in the hole. Air from the lungs passes through the valve into the esophagus and vibrates the muscles at the top of the esophagus, creating sound.
The patient may also need SLP treatment for swallowing problems after laryngectomy. If the laryngectomee has symptoms or complaints of dysphagia, the SLP will perform an evaluation. She may recommend diet changes, compensatory strategies to make swallowing easier, and/or exercises to strengthen swallowing muscles.